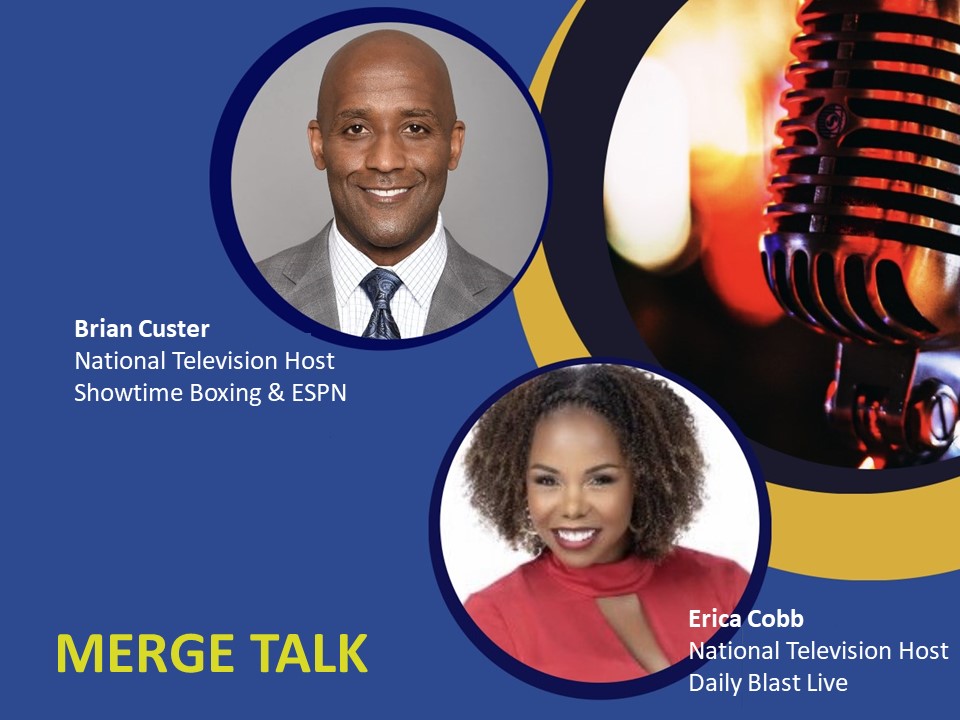 DENVER - AkGlobe -- The Merge Project is thrilled to announce the launch of its dynamic speaker series Merge Talk debuting on Tuesday, October 18th at 9/7 PM ET/CT. ESPN and HBO Commentator and host of The Last Stand, Brian Custer and Daily Blast Live Co-Host and host of The Comeback, Erica Cobb are the featured speakers for the inaugural, interactive, virtual event!

Merge Talk is a digital speaking platform dedicated to media literacy and designed to showcase industry talent and executives and their respective journeys for the purpose of educating and inspiring future broadcast professionals. Merge Talks will include discussions on navigating the broadcast industry, setting and reaching goals in various aspects of broadcast journalism, becoming a social media influencer and building a marketable and sustainable brand for long term success. Elements Cobb and Custer have mastered says The Merge Project CEO and Founder Lynn Briggs, "I'm so excited to have Brian and Erica as our first Merge Talk speakers. These two have ascended to the top of their fields to become successful, national television personalities and podcasters. They have done so in the face of adversity and personal challenges, and their stories will serve to enlighten and motivate individuals currently working in the industry and those who aspire to become broadcast professionals."  The Merge Talk series is a foregleam into the caliber of educators and the curriculum that will be part of Merge Media Academy opening in the spring of 2023.

More on AkGlobe News
Custer started his broadcasting career in his hometown of Columbus, Ohio, as a news and sports reporter for the local ABC-TV affiliate. He later worked in Dallas as a news and sports reporter before moving to New York as a host at SNY-TV. He won two Emmy Awards while at SNY-TV. In 2021, he joined ESPN from Fox Sports, where he called college football, college basketball and boxing since 2014. In addition to his ESPN duties, Custer serves as host for Showtime Championship Boxing and the podcast Last Stand with Brian Custer. He holds a degree in broadcast journalism from Hampton University. A cancer survivor, Custer is a spokesman for the Prostate Cancer Foundation. "I am honored to help kick-off the Merge Talk series, and I look forward to sharing career highlights, experiences and insight with those who are pursuing a career in broadcasting."

Cobb is a seasoned television host and social commentator who is currently a co-host on Tegna's "Daily Blast Live", the only national daytime talk show airing live in all time zones. She also hosts her own weekly podcast "Comeback with Erica Cobb", which airs on all major social platforms and lives at Ebony Covering Black America Podcast Network.  Cobb's social justice and entertainment commentary has introduced more than 58 million unique viewers to "Daily Blast Live" on social media. It's earned her nods from celebrities like Gabrielle Union, guest co-hosting spots on podcasts like rapper T.I.'s "Expeditiously" and made her a highly requested moderator for panels on a variety of hot social topics. "I am honored to participate in the Merge Talk Series. As a 360 media professional (Radio, Print, Television, Podcast and Social Media) for nearly 20 years, I am always excited to share my experiences with those who are seeking to enter or grow in the industry.  For far too long inside information was considered just that, but I believe to be a part of the cultivation of media with new voices and ideas truly benefits us all," says Cobb. "Programs like the Merge Talk series are so important because they link working professionals with those who want to be in their shoes one day.  As an African-American woman, I find it my responsibility to continue the diversification of media as we know it.  There must be mentorship to usher in new talent, this is an excellent way to cultivate mentorship."

More on AkGlobe News
For more information or to purchase tickets for Merge Talk with Brian Custer and Erica Cobb, visit www.themergepro.com. Tickets are $22.50. Merge Talk will take place via Zoom on Tuesday, October 22nd at 9 PM ET/7 PM CT.