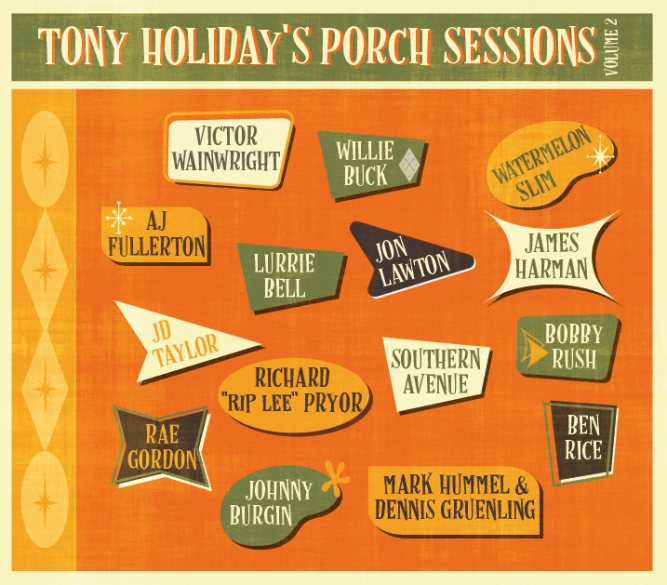 'Porch Sessions, Volume 2' slated for September 17, 2021 release
MEMPHIS, Tenn. - AkGlobe -- Blue Heart Records is pleased to announce the signing of vocalist and harmonica player Tony Holiday.  The Salt Lake City, Utah native, now residing in Memphis, captured international recognition with his 2019 album, Porch Sessions, featuring blues artists from across the USA.  Since then, Holiday has released his solo debut, Soul Service (2020) and continued to write, record and produce.  He also makes plenty of time for performing, with a robust tour schedule that allows him to share his music in its most intimate form, live.

Now, Holiday continues his live field recording sessions with a second volume, recorded with co-producer JD Taylor at locations across the US from California to Memphis, TN to Bristol, VA; "One Take Jake" style.  Volume 2 offers an impressive array of featured artists, including Victor Wainright, Bobby Rush, Watermelon Slim, Lurrie Bell, and more.  Reminiscent of the very early origins of the blues, when friends and family gathered on the porch to make and enjoy music, Porch Sessions Vol. 2 captures the essence of the genre, as performed by modern-day blues masters.  A healthy dose of harmonica weaves through the sessions, as Holiday enjoyed participating in the music making as much as he enjoyed recording and producing it.

More on AkGlobe News
"I have a real penchant for preserving, respecting and sharing the heritage of the blues genre," says Sallie Bengtson, partner at Blue Heart Records. "It is exciting to work with a young artist like Tony who shares and advances similar values."

Holiday says, "I'm very excited to have the opportunity to extend my Porch Sessions to a second volume. This project means so much to me, bringing the blues back to the porch where it all began for so many.  I am just as thrilled to be working with Sallie, Betsie and the Blue Heart team as they share the same passion for blues music and elevate it to new heights."

Holiday's excitement about the new release is tempered with bittersweet memories of James Harman, who passed away in May.  Tracks from Harman appeared on the first volume, and the track on Volume 2 now takes a sacred place in the expanding musical collection.  "This album is dedicated to my hero, mentor and friend James Harman, the rawest of them all in my opinion. James fit the mold of this concept album to the T.  We love and miss you Daddi-o, every day," says Holiday.

More on AkGlobe News
Album preorders will begin on August 20 with the release of "Going to Court 2," by the late James Harman.

Publicity and Promotion by Blind Raccoon.